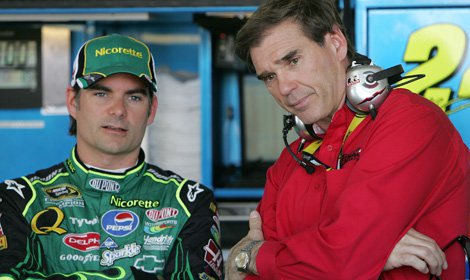 MOORESVILLE, N.C. – Ray Evernham can still recall the first time he met the wiry kid from Pittsboro, Ind., who looked like he was 14 years old even after he’d already turned 19.

Jeff Gordon always had a way of standing out beyond simply piloting a race car.

Evernham – then known for his Modified racing success – was injured and looking for something to do. He’d seen Gordon on ESPN’s Saturday Night Thunder open-wheel telecasts, where the teenager was competing for trophies against legends like Rich Vogler. Evernham didn’t know what to think when, after Andy Petree suggested he work with Gordon and then-Busch Series car owner Hugh Connerty in 1990, he went to Charlotte, N.C. and met Gordon and his parents in a hotel room to plan out their strategy.

Evernham had his briefcase. It contained what one would expect a briefcase to have: lots of papers to go over throughout the day. Gordon, who traces his roots back to California, was different.

He brought a briefcase, too. It contained some papers, and what could be expected of a teenage racing enthusiast who wasn’t sure if lunch was part of this meeting.

“When (Gordon) opened up his briefcase, he had some papers in it but he also had a NASCAR magazine, an open-wheel magazine, a GameBoy, and some peanuts,” Evernham recalled on Friday.

Evernham likened Gordon to a child prodigy. Sometimes, people can recognize a talent before even seeing the kid perform. Gordon talked a good game.

“He was just a very pleasant young man,” Evernham said. “He was very astute about the race car.”

But could he drive a car much heavier than those he was used to in his sprint and midget racing background?

The two paired up and went to Charlotte Motor Speedway to kick off Gordon’s stock-car career in a white No. 67 Outback Steakhouse Pontiac Grand Prix. The car looked simple on the outside. It contained no flashy rainbow-themed paint job like Gordon and Evernham would soon become famous for, because Outback didn’t need to worry what its car looked like when it wasn’t sure if its driver could hack it in NASCAR.

Gordon failed to qualify for his first race, the 1990 All-Pro 300 at Charlotte. Fair enough. No rookie turned the world on its side in his first try.

Nobody did on his second try, either – until Gordon came along.

He qualified on the outside pole for what would be his NASCAR debut at North Carolina Motor Speedway. ESPN’s broadcast crew could see the confidence in Gordon’s eyes when it captured him on camera before the race. He crashed after 33 laps and finished 39th, but the seeds of success were already sewn. Jeff Gordon was going to be a star, and Ray Evernham was going to be the man who helped him realize his potential.

Since he began his NASCAR career, Gordon’s unmatched success – 92 Sprint Cup wins, the first 47 coming with Evernham calling the shots – plus four championships and three Daytona 500 victories put him in the conversation for the best stock-car driver of all time.

Gordon’s announcement on Thursday that he’ll no longer race on a full-time basis after 2015 shocked many of his fans and fellow competitors. Evernham saw it coming. Gordon told him on Monday and asked if he’d accompany him to the No. 24 shop at Hendrick Motorsports in Charlotte when he went public with the news.

“Jeff and I have a relationship that’s probably more than driver-crew chief,” Evernham said. “It’s more like big brother-little brother. (There were) lot of mixed emotions. We started 23, 24 years ago together. Having to stop and reflect on that was an emotional time for everybody.”

There will be more time to reflect on it after Gordon hangs up his helmet for the final time. Until then, the man charged with turning Gordon into a household name by building his first Sprint Cup cars will just enjoy watching his friend throughout the season.

Evernham didn’t have trouble giving Gordon a car that could stay out front from 1990-99. It was more of a challenge on Friday to think back to what was the most memorable moment surrounding their careers together.

“That’s the hard part, because Jeff and I had such a good run,” Evernham said. “Some of my favorite memories are things you wouldn’t expect, like the first time I worked with him, when he was driving the Outback car at Rockingham in 1990. Just a young, innocent, tremendously talented young man.

Gordon won 13 races in 1998. Unlike present-day Sprint Cup drivers, he didn’t have 36 chances to win. The schedule was shorter by three races. Gordon’s dominance just made it seem like it dragged on forever.

That same dominance is what set him apart, Evernham said. It’s also what will undoubtedly make Gordon a first-ballot inductee into the NASCAR Hall of Fame, fittingly located in the same city as the hotel at which Gordon and Evernham first met nearly a quarter-century ago.

“Jeff Gordon won’t be defined by his racing career,” Evernham said on Friday. “He’ll be defined by what he does next. He could do anything. Jeff is a smart guy. He really cares about his charity.