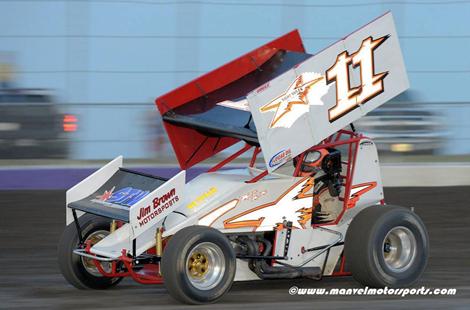 TULSA, Okla. (July 15, 2014) - Taking on tracks in Texas and Louisiana this coming weekend, the Griffith Truck and Equipment ASCS Gulf South Region will hit the clay at the Golden Triangle Raceway Park in Beaumont, Texas on Friday, July 18 before their long awaited return to the Leesville 171 Speedway in Leesville, La. on Saturday, July 19.

The season's final visit to the Golden Triangle Raceway Park, four previous trips has yielded just as many winners. Jon Agan grabbed his first ASCS victory on March 14. Tommy Bryant topped the field on May 2 with Johnny Herrera running to victory on May 25. Travis Rilat is the most recent winner with the series at the one-third mile oval on June 20. Friday, July 18 is scheduled to include EMSA Mini-Sprints, Jr. Mini, Hobby Stocks, Street Stocks, and Mod Lites. For more information, log onto http://gtrpbmt.com.

Last visited by the Gulf South Region on July 18, 2003, a night at the Leesville 171 Speedway was ruled by 2002 and 2003 series champion, Kelly Angelette. Make their return on Saturday, July 19 the night's undercard includes Factory Stocks, Stingers, Street Stocks, Modifieds, Limited Modifieds, and Rookie Limiteds. Leesville 171 Speedway can be found on Facebook for more information.

Channin Tankersley continues to lead the way in the series standings with a 76 point advantage over Ray Allen Kulhanek. Chris Sweeney is third with Klint Angelette and John Pate making up the top five. Of the 16 A-Features contested in 2014, Tankersley, Kulhanek, and Sweeney are the only drivers to make the full count so far.

In 16 events, 13 drivers have claimed victory. The season's only repeat winners are Travis Rilat, Blake Hahn, and Johnny Herrera with each scoring a pair of wins.