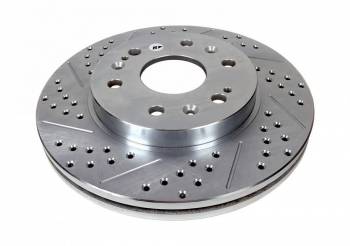 Baer Sport Rotors are custom engineered for a perfect fit replacing the stock discs on your year, make and model

Your Baer Sport Rotors are slotted and cross-drilled using the same counter rotational pattern found on professional racecars from NASCAR to Le Mans; Give your brake pedal a ferocious bite while eliminating the threat of outgassing and enhancing your wet weather responsiveness; Strict production tolerances ensure even pad wear along the face of your Baer Sport Rotors; Baer Sport Rotors kick start your car, truck or SUV's looks with their dynamic visual impact; No modifications or oversize wheels required-Baer Sport Rotors are direct OE replacements; Baer Sport Rotors boast a straightforward installation-you don't even have to bleed your brakes; Baer has such confidence in your Sport Rotors that they back them with a 3-year warranty against warping and cracking

This product can expose you to chemicals including Nickel - Toluene-diisocayanate, which is/are known to the State of California to cause cancer