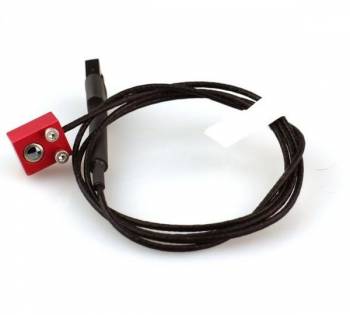 These infrared sensors are used to monitor temperatures where contact cannot be made with the item being monitored. In racing, they are commonly used to monitor temperatures across the face of a tire, but they can be used for any non-contact measurement. The sensor will measure temperatures from 0-400??F. The IR Temperature sensor has a 4:1 ratio focal point. That means that when the item being monitored is four inches away from the sensor, the focal point will be one inch in diameter. If the sensor is twelve inches away, the focal point will be three inches in diameter.

Racepak LLC was founded in 1984 by Spencer Eisenbarth and Ron Armstrong, originally as Racepak and its parent company, Competition Systems, Incorporated (CSI). Both men were engineers with strong backgrounds in electrical and mechanical applications, and both had an interest in motor sports. Through an earlier joint effort aimed at obtaining data for the improvement of the Unlimited Hydroplane that Armstrong was piloting at the time, both men realized the need for onboard data acquisition equipment. Their respective backgrounds qualified them to develop such equipment, but the major task that needed to be overcome was in designing and building a data recorder that could survive in the unfriendly world of race vehicles. That challenge became the initial goal that led to the formation of Competition Systems, Inc. The continued success of Racepak has allowed CSI to grow. In the years that have followed Eisenbarth and Armstrong have quietly guided CSI into a strong presence in many forms of motor sports.

This product can expose you to chemicals including Nickel (Metallic) - Chromium (Hexavalent compounds), which is/are known to the State of California to cause cancer and birth defects or other reproductive harm