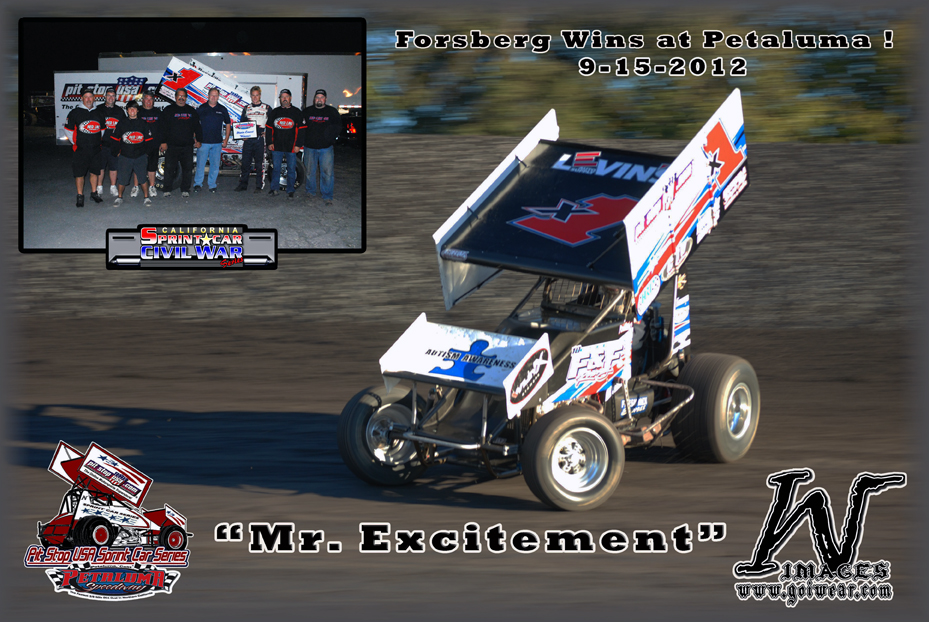 PETALUMA, CA – SEPTEMBER 15, 2012:  Expectations were high for an exciting shootout between the Civil War Series and Petaluma Speedways Pit Stop USA Sprint Car Series regulars for the third and final California Civil War Sprint Cars Series event Saturday night and the crowd was treated one of the most exciting races of the year.

Thirty-seven of the best winged 360 sprint cars and drivers in the west were on hand to compete on the ultra-fast and hooked adobe 3/8 mile speedway.  Many of the Civil War Series top competitors drew early qualifying spots to set up much of the drama that played out later in the evening as the track surface came in and qualifying times began to plummet midway through the order.  Sean Becker, fresh off his first World of Outlaws win last week, turned his thirty-fifth qualifying order into a scorching 12.870 qualifying lap to nip Rico Abreu by a mere 0.005 seconds.

At the drop of the green in the B-Main the crash fest was on with Stephen Allard, Chris Masters, Matthew Haulot, Bill Cornwell, and Steve Tatterson involved with sprint cars stacked three high on the front stretch. After a lengthy red, Steve Jaquith found the turn one wall and Eli Deshaies getting upside down hard in turn three when a car slowed quickly in front of him as the red flag came out.

Once the green reappeared Sean Becker cruised to the win over Chase Johnson, Shane Golobic, John Michael Bunch, Wiesz, and Cornwell who all transferred to the A-main.

Former Petaluma Track Champion Art McCarthy and six time and defending Civil War Champion Andy Forsberg led the field to green in the main event, with Forsberg using his patented high line style to blow past McCarthy to the early lead.  Rico Abreu who immediately rocketed by the entire second row from his outside third row starting position to pursue the six time and defending Civil War Series Champion.

Billy Butler got by McCarthy as did Kyle Hirst by lap five for second and third.  On lap six, Sean Becker crashed hard exiting the track over the turn four wall tearing down a section of the sound barrier fencing in the process.  The track safety crew mad quick repairs and at the drop of the green the next nine laps saw Forsberg in the Pit Stop USA sponsored x1 of F&F Racing continue to lead when on lap 16 Kyle Hirst got together with Butler and disappeared through the turn two sound wall and ended up being retained by only a chain link fence from entering the fairgrounds livestock area.

Once again the Petaluma Speedway crew had to rebuild another sound barrier. The final laps saw some of the best racing of the year at Petaluma with Forsberg quickly dispensing of a lot of lapped traffic with Rico Abreu in hot pursuit.  Forsberg’s lead would vary from two car lengths back to ten as the two drivers put on an exciting duel lap after lap. In the closing laps Forsberg and Abreu were clocked at sizzling 12.389 seconds at over 108 MPH just an eyelash off of the track record with the closest competitor running a 12.857 pace. The final few circuits saw Abreu close in as Forsberg had trouble dispensing with the lapped car of Roberto Kirby and as the white flag flew Abreu tagged the front stretch wall giving Forsberg a little breathing room entering turn one.  But the hard charging Abreu made things exciting to the final corner with a banzai slide-job of Forsberg that came up just short. Following Forsberg to the checkers was Abreu, Butler, McCarthy, and Chase Johnson.

The win for F&F Racing was special for Andy as his father Richard Forsberg was inducted into the West Capital Raceway Hall of fame earlier in afternoon plus a bonus of putting the Pit Stop USA sponsored number x1 into victory lane at Petaluma Speedway where the company is the title sponsor.