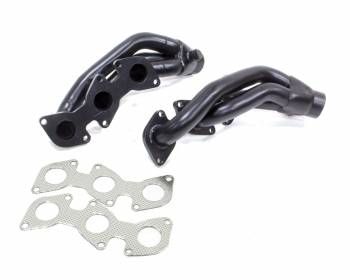 Flowtech Performance Exhaust was founded in 1994, by exhaust market expert Gary Biggs, with the mission of delivering high quality performance exhaust at a great value. The mission was successful and in less than two decades Flowtech became the leader in value priced exhaust systems. Flowtech cornered its place in the market with aggressive and memorable product names such as Raptor, Terminator, Afterburner and Warlock. Flowtech even revived some names from back in the day like Purple Hornies. Flowtech made its mark with simple yet effective improvements like slotted port flanges giving added wiggle room during header installation. They dimpled their tubes at the port to make more room for the header bolts and they parallel ground their flanges to assure a tight seal. Flowtech innovations include their unique Afterburner headers which separated the odd firing cylinders with a velocity tube to improve scavenging. Their patented Warlock bypass muffler won the SEMA best new product award for its revolutionary open or closed design in 1996. When Flowtech became part of Holley Performance Products in 1999, the company continued to focus on value, with an emphasis on late model cars and trucks. Headers and exhaust systems were developed for Mustangs, Camaros, and all types of full size trucks - including diesels. The same innovation continues today with the addition of universal X-pipe kits and X-pipe kits with built in cut-outs. Continuous product updates and improvements to manufacturing processes will keep Flowtech the leader in value priced exhaust systems. We hope you enjoy your Flowtech product as much as we enjoy building it!