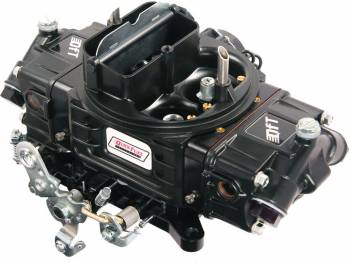 Super Street Series carburetors combine street-friendly drivability and track-capable performance in a single value-oriented package. Setting them apart from ordinary street carbs, they feature billet dual metering blocks and throttle-bodies that offer tighter tolerances and eliminate porosity. Not only are Super Street Series carbs available with both vacuum or mechanical secondaries, QFT™ also offers models designed and calibrated specifically for E85 fuel and blow-through forced induction applications. Running alternative fuel or boost no longer requires an expensive custom carburetor. All SS-Series carburetors are equipped with universal throttle levers to accommodate Ford A/T kickdown, GM 700 R4 mounting holes, and ability to mount brackets for Chrysler vehicles. Available in 8 different sizes, bolting on the ultimate street/strip carburetor has never been easier. Even a carburetor that performs great can still be an eyesore, but it doesn't have to be that way. Quick Fuel Technology's proprietary Black Diamond® coating offers excellent corrosion resistance as well as a durable finish that easily stands up to dirt and oil. In addition to great looks, the PTFE coating reduces fuel temperature by six percent for improved performance.

Innovators in fuel systems is more than just a by-line. Quick Fuel Technology, since it's inception in 1998, has grown exponentially in its 11 years of business culminating into the benchmark by which performance carburetors are measured. The growth and success of Quick Fuel Technology is attributed to the strength and determination of its staff.