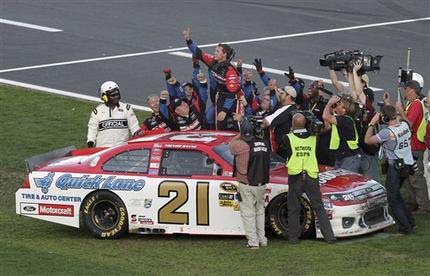 Trevor Bayne proved to the racing world why he got the nod to drive the Wood Brothers Motorcraft Ford in 2011, and collected himself quite a nice birthday gift along the way: A victory at the Daytona 500.

Bayne held off a hard charging Carl Edwards by 0.118 seconds and became the youngest winner in the history of the Daytona 500, just a day after his 20th birthday. Quite an accomplishment considering it was Bayne's second NASCAR Sprint Cup race giving NASCAR pioneers Leonard and Glen Wood an end to their 10-year long drought from visiting Victory Lane as car owners.

While the race was thought by most racing insiders to lack the excitement typical of most restrictor plate races due to changes to the NASCAR Sprint Cup cars and the ultra smooth new pavement at Daytona International Speedway, the event did produce a record 74 lead changes among 22 drivers. The new two car drafting prevalent in the race created many accidents that knocked out many of the top drivers in the series, including Dale Earnhardt Jr, Jeff Gordon and Jimmy Johnson.

David Ragan was leading the field on NASCAR's first attempt at a green-white-checkered finish. But he was black flagged for jumping the start by changing lanes before the starting line.  This opened the door for Bayne being pushed by Bobby Labonte to take the final green flag and drive on to his historic win. Labonte was passed by Edwards in the final moments with David Gilliland finishing third, followed by Bobby Labonte and Kurt Busch.

NASCAR has payed close attention to fan response over the past few years by implementing changes to cars including the move away from the ridiculous looking wings and front splitter of the original "Car of Tomorrow" to a much present a much better looking race car.  This along with double file restarts, green-white-checker finishes, and letting the drivers "police themselves" on the track to improve competition have come a long way to improve the events over the past few months.  Reduced ticket prices at many events and even the move back to country music artists performing in the pre-race festivities show that NASCAR clearly is working hard to get back to their roots and restore the original fan base that built the sports popularity before it began to decline a few years ago.

While NASCAR clearly needs to work on modification of the new aero package to reduce the two car drafting seen this past week at Daytona and improve the show, it is obvious that NASCAR has been working hard to improve the quality of the Sprint Cup Series events overall.  All things considered, it should be a great 2011 season for the NASCAR Sprint Cup Series.