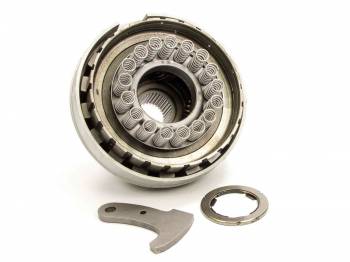 The planetary creates all of the different gear ratios that a transmission is able to produce. An automatic transmission contains two complete planetary gearsets folded together into one component. A planetary gearset has three main components: Sun Gear, Planet Gears and Carrier along with a Ring Gear. Each of these three components can be the input, the output or can be held stationary. Choosing which piece plays which role determines the gear ratio for the gearset. TCI offers a variety of low gear replacement planetaries for several of the most popular Ford and GM transmissions. With additional gear reductions in both first and second gear, these gear sets work well in all applications requiring an additional gear for better take-off. From heavy drag cars to off-road 4x4s to tow trucks, a TCI Low Gear Planetary can improve low end torque without adversely affecting the final drive ratio.