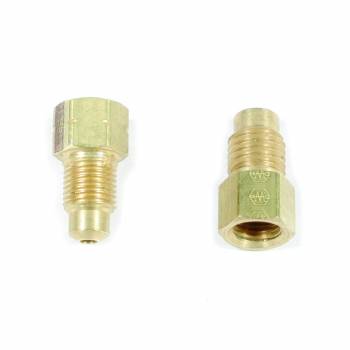 These adapter fitting kits simplify the installation of a Roll Control or line lock system into late model Camaro, Firebird or Mustang vehicles having metric threaded brake line fittings. Designed to be used with the Hurst Roll Control installation kit # 5671510, these kits consists of special conversion fittings needed for a fast, simple installation. Adapters to 1993 to 2002 Chevrolet Camaro and Pontiac Firebird and 1985 to 1996 Chevrolet Corvette.

For 60 years, Hurst has been attached to some of America's most legendary vehicles, such as the Hurst OLDS/442, the Hemi Under Glass Barracuda, and even the only non-OEM official pace car of NASCAR. Over the years, Hurst has been the OEM shifter supplier for the Pontiac GTO, Plymouth Barracuda, Plymouth Super Bird, Ford Mustang Boss 302, Ford Mustang Shelby GT500 KR, Oldsmobile, AMC and the Dodge SRT-10 pick-up, just to name a few. Today, Hurst continues to develop industry leading performance products and carry out George's original vision. Hurst's latest, the Elite Series line of performance products for modern muscle cars, includes not only their world-famous shifters, but also exhaust systems, wheels, springs, floor mats, and graphics. The Elite Series program allows customers to essentially build their own version of a classic Hurst car.

This product can expose you to chemicals including Nickel (metallic) - Lead, which is/are known to the State of California to cause cancer and birth defects or other reproductive harm