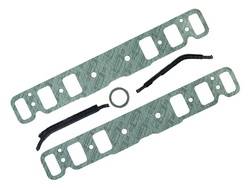 Using his own 57 Chevy as a rolling test bed, drag racer Joe Hrudka launched the most famous gasket company in the world more than half a century ago (started in 1964). Building a name for himself and his company competing at Cleveland-area tracks Norwalk and Dragway 42, Hrudka quickly established Mr. Gasket as the go-to gasket source for racers with a line of head gaskets, exhaust gaskets, oil pan gaskets, and fasteners that sealed perfectly every time and withstood the punishing temperatures and pressures of racing. Now an important part of Holley Performance, Mr. Gasket continues to expand application coverage with more and more new products for race cars and muscle cars alike. Beyond the gaskets that made the Mr. Gasket brand what it is today is an endless variety of high-performance parts, including carburetor and fuel system components, chrome-plated accessories to dress up your engine bay, fuel additives, shifter accessories, cooling-system accessories, specialty tools, and a wide array of heavy-duty suspension and driveline components.